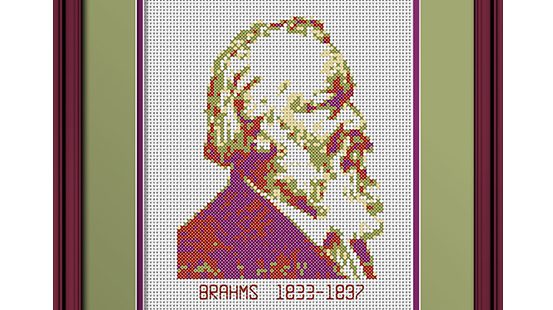 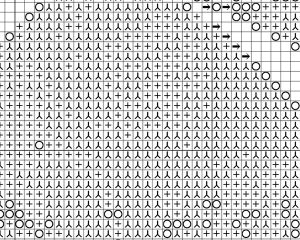 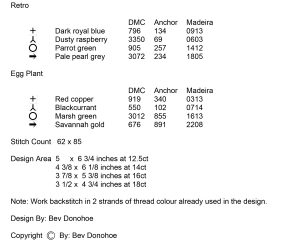 The images on the left show a portion of the key and a portion of the chart for the full size Brahms patterns. This pattern is available for mmediate download on confirmation of purchase from my Etsy shop here. You will also find the half size Brahms pattern available here on my Etsy shop. Click on the image of the pattern to see sample key and chart and other info about the pattern.

Some Brief Details About Brahms…

Johannes Brahms was a German composer and pianist who wrote symphonies, concerti, chamber music, piano works, and choral compositions. Widely considered one the 19th century’s greatest composers and one of the leading musicians of the Romantic era, he was born May 7, 1833, in Hamburg, Germany. Music was introduced to his life at an early age. His father was a double bassist in the Hamburg Philharmonic Society. Brahms began playing piano at the age of seven. By the time he was a teenager, he was already an accomplished musician. In 1853 Brahms was introduced to the renowned German composer and music critic Robert Schumann. The two men quickly grew close, with Schumann seeing great hope for the future of music in his younger friend. He dubbed Brahms a genius and praised him publicly in a famous article. The kind words quickly made the young composer a known entity in the music world.
In 1854 Schumann fell ill. In a sign of his close friendship with his mentor and his family, Brahms assisted Schumann’s wife, Clara, with the management of her household affairs. Music historians believe that Brahms soon fell in love with Clara, though she doesn’t seem to have reciprocated his admiration. Even after Schumann’s death in 1856, the two remained solely friends. Brahms never married.

On May 20, 1896, his old friend Clara Schumann passed away after several years of health problems. Around this time, Brahms’ own health began to deteriorate. Doctors discovered that his liver was in poor condition. Brahms gave his last performance in March 1897 in Vienna. He died a month later, on April 3, 1897, from complications due to cancer.

This site uses Akismet to reduce spam. Learn how your comment data is processed.