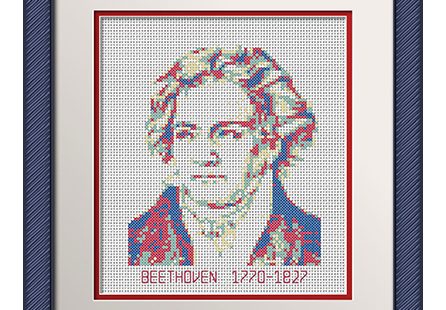 Ludwig Van Beethoven was a German pianist and composer (December 1770 to March 26, 1827). Beethoven is widely considered one of the greatest composers of all times. He composed sonatas, symphonies, concertos and quartets, combining vocals and instrumentals and widening the scope of these forms of music. Beethoven is a crucial transitional figure connecting the Classical and Romantic ages of Western Music.

Beethoven began to lose his hearing in his mid 20’s and it is believed that he was totally deaf by his mid 40’s. The exact cause of his hearing loss is unknown. Theories abound from syphilis to lead poisoning, typhus or possibly even his habit of dipping his head into cold water before composing and/or to keep himself awake. At one point, Beethoven also claimed that he suffered a fit of rage in 1978 when someone interrupted him at work. He fell over and when he got up, he found that he was deaf. It has also been blamed on his gastrointestinal problems.

Despite his deafness, he continued to compose music. He had heard and played music fot the first 3 decades of his life and knew how the instruments and voices sounded and workd together. His hearing loss was generally considered to be a slow deterioration, so he could always imagine what the compostions would sound like in his mind. As his hearing got worse, his housekeepers said that he would sit at the piano, put a penicl in his mouth, touching the other end of it to the soundboard of the instrument to feel the vibration of the note.

To be able to write the music itself is beyond and achievment 🙂 To be able to continue to do so when he was deaf leaves me lost for words! I can’t even get my head around how they were even able to write and reproduce the music for all the different instruments in the orchestra? They didn’t even have a photocoier much less computers with copy/paste!

As with the remainder of the series of Composer patterns, Beethoven – Full Size, is available in four different colourways -: Egg Plant, Mellow, Modern and Retro. Beethoven is shown in the ‘Egg Plant’ colourway at left.

See below for images showing part of the chart and the ‘key’ for this pattern. The key shows the threads in all colourways for DMC, Anchor and Madeira threads. Images shown on this website are utilising the DMC threads. Please be aware that there may be colour variations in you stitch the design using Anchor or Madeira threads. This pattern is available for immediate download on confirmation of payment at my Etsy store. All colourways are included in your purchase. You can see the other colour variations of this design along with the other composer patterns currently available in this series in the Full Size Composer Cross Stitch Gallery.

This site uses Akismet to reduce spam. Learn how your comment data is processed.